The laughing death’s head disappeared from Faisal’s flatscreen, leaving a black void in its place. Behind him the VIPs murmured. He didn’t need a translation from Paolo to know they were wondering whether this was a problem or just part of the show.

He caught a whiff of one of Don Carlos’ Turkish cigarettes. Unlike the narco and guerrilla VIPs Don Carlos would not have any trouble figuring out whether this was part of the show.

That’s what you get for improvising, for taking a job from guys who’d never held a touchscreen but still decided on a whim to fight a cyber war. Not that Don Carlos would ever admit that. This would go down in history as Faisal’s fault. It would be Faisal’s failure. It would be an excuse to pay Faisal less, to talk shit on Faisal’s work, to have Faisal handle more shit-kicker clients rather than the cream of the crop. You lived and died by your reputation in this business and he resented the fact his might take a hit because of forces wildly out of his control.

Faisal hoped he hadn’t said any of that out loud.

Then, the sound of Paolo’s voice low in his ear: “He wants to know what’s happening.” “He” meaning Don Carlos, of course. Given Paolo’s tone of voice you’d think he was talking about some deity that would strike him down if he didn’t show proper reverence.

“Tell him I’m fucking working on it,” Faisal snapped.

Paolo retreated into the crowd of narcos. The murmuring had gotten louder in in the interim. By now the majority of the VIPs clearly suspected something was actually wrong, as opposed to a minor hiccup that would be resolved quickly so the show could resume.

Faisal parsed the network traffic in the vicinity of the prison. There wasn’t much happening in the pre-dawn hours. Certainly not in the slums. No bots on the network. Either the prison had a total supply of one or the others had long since been shut down and dismantled. Maybe scrapped for spare parts.

He widened his search pattern.

A couple small, AI-controlled surveillance bots ran racetrack pattern circuits around the neighborhood. Either mercs or USAF. The police didn’t fly drones here. The military police had them but didn’t use them, so far as he knew, and these models looked too new to be local. Faisal didn’t bother with the details. Under normal circumstances he’d pause to fuck with them, but these were far from normal circumstances and the little bots weren’t armed, which made them just about useless.

He widened his search pattern further.

About ten kilometers out at twenty-thousand feet he hit the jackpot. A proper USAF EXPED drone orbited around the edges of the capital. It had a full sensor suite, complete with visual targeting pod and FLIR cam (so the VIPs could watch the fireworks). Most important, however, was its full complement of laser-guided missiles.

Drones weren’t hard to crack. Faisal did it on a daily basis to confuse the ones that came looking for the narcos’ jungle camps. But there was a big difference between cracking a drone to give the AI pilot a little nudge in one direction or the other and cracking a drone to rain hellfire down on a major metropolitan area. The USAF operators would notice. In the short-term they would ground the drone fleet, re-examine their operating procedures, probably tighten up security. USAF EXPED was slow but not completely stupid. In time they’d fix the most obvious exploits and Faisal would have to crack the drone fleet all over again.

He paused. Such a waste. Here he’d throw his whole setup away to keep the client from PMSing all over the place. On top of that a drone hack would be a rip-off of a past op. He’d done drones before, in Grozny. It didn’t help your rep to execute the same sorry hacks again and again.

Then Faisal caught the sweet scent of a Turkish cigarette again.

His nostrils flared at the smell, and he knew he hardly had a choice.

I hate the word “content.” It is a stupid, generic word. When I see the word “content” I immediately think of those silly lists of “Top 5 SEO Tips” or “10 Ways to Improve Your Keyword Visibility” that are totally unhelpful in that they are almost certainly written by freelance copywriters who know next to nothing about SEO or keyword visibility that they couldn’t find in the first page of a Google search.

So, thanks in no small part to Carisa’s inspiring suggestion, I am proud to present my “5 Words or Short Phrases to Use Instead of ‘Content.'”

Hopefully this will give you a few new words/phrases to spice up the shit you write online.

Emily shouldered her way through the MPs who’d congregated on the cell block. Each time it went the same way. She pushed hard with her shoulder or elbow, the victim turned to get a look at the offending body part and then, invariably, his jaw dropped at the sight of the slight brunette dressed like a hooker forcing her way through this directionless mob of military men.

At which point she gave each man a look that said get the fuck out of my way and stay there without needing any kind of translation.

Pritchard followed, struggling to keep up.

The lights were still glowing brothel-red, though the alarm had quit screaming. The shooting had also stopped.

When Emily reached the front of the crowd she found the corridor leading to Fulton’s cell littered with mangled corpses. Empty shotgun shells and 5.56 millimeter casings lay strewn around in between them. The riot control bot sat in the center the corridor. Its faceplate was dark, the sensor unit hung low, almost as if the thing were ashamed of itself. Its armored body had been pitted and scratched by gunfire but otherwise it remained intact.

The men at the front of the mob were still holding it at gunpoint, as if it would make any kind of difference if the machine suddenly woke up and started hosing them down with auto-shotgun rounds.

“What are you going to do with it?” Emily asked.

The men ignored her.

A survivor lay propped up against the wall on her left. He appeared to be bleeding out slowly and painfully through his gut. The blood looked like black tar in the harsh red light. But what really caught her eye was a belt of grenades slung over his shoulder. The man watched, wide-eyed with disbelief, as she bent and plucked one free.

Emily turned the grenade over in her hand. You ain’t seen nothin’, pal, she thought.

She strode up to the bot the way another woman might sashay up to a young marine at the bar, a thousand-dollar pair of Manolos in a boutique or a silver platter full of champagne and oysters. She wedged the grenade in the gap between the base of the bot’s sensor unit/head (beneath its “chin”), pulled the pin, spun on her heels and walked the fifty yards back to the mob of MPs. By now they had lowered their rifles and were watching the spectacle with jaws unhinged, as if Emily were a topless martian with purple skin and six tits fresh off a UFO.

The force of the blast sent the bot’s head flying into the concrete block ceiling.

Emily dropped the grenade pin in her coat pocket. She wrung her hands.

They found Fulton hunched over on the lower bunk. He had a hand on his lower back. Slashes of blood leaked through the fabric of his torn shirt, as if a grizzly bear had taken a swipe at him.

“You all right?” Emily asked.

“One of the stupider questions I’ve been asked lately.”

“What the hell happened?”

“My guess is your narco friends are working with a very capable freelancer, probably Russian or Chinese. He’s augmented, and he’s either very good at transmuting, very good with AIs or some combination of the two. Apparently he wants to kill us. Me in particular. Possibly to get a hold of this.” Fulton held up the cartridge containing Reese’s app.

Emily nodded. “He’s not Chinese or Russian. He’s an Arab.”

At that Fulton perked up, though he winced as he straightened his back. “How do you know that?” For once he sounded genuinely surprised.

Emily gestured to Pritchard. “My colleague, Mister Pritchard, convinced the commandante our work was in his country’s best interest. He, in turn, helped convince our friend Jefe of the same.”

“Pleasure to meet you,” Pritchard said.

“How much did you have to pay him for that?” Fulton asked.

“Too much,” Pritchard replied. “You’re free, by the way.”

My writing schedule suffered some major disruption recently as a result of my job search (which ended quite well, incidentally). With that professional goal accomplished, I should be able to ease back into my regular writing routine.

Something had gone horribly wrong.

Faisal wasn’t worried about the squad of MPs who’d ridden to the rescue. The bot had a hardened shell you’d need a surface-to-air missile to crack. It would make short work of them. Of the six who came through the door four already lay dead in the corridor. The surviving pair retreated from the CCTV camera’s field of view. They took potshots from the doorway at the end of the corridor. Sparks flashed along the bot’s armor as bullets ricocheted off its armored shell.

At first the hunter killer tried to pick the survivors off from a distance. It took about a minute for it to learn that a riot gun was a rather imprecise weapon and adjust its strategy accordingly. Now it rumbled down the corridor, clearly intending to finish off the opposition in close quarters.

Yet despite the bot moving slowly and implacably toward the highest priority threats, its sensor system went offline. A skull and crossbones replaced the shimmering diagnostic readout. The skull’s jaw worked up and down in rapid succession, imitating laughter – a calling card from another operator.

“Why doesn’t it shoot?” one of the narcos asked.

At that moment Faisal could have sworn he saw Don Carlos fold his arms across his chest.

One by one little death’s heads began replacing all the information he’d dialed up on his lens, till his whole field of vision looked like a cartoon cemetery, everyone in residence mocking him with silent, imitation laughter.

The nutty professor, Faisal realized. The motherfucker can hack. 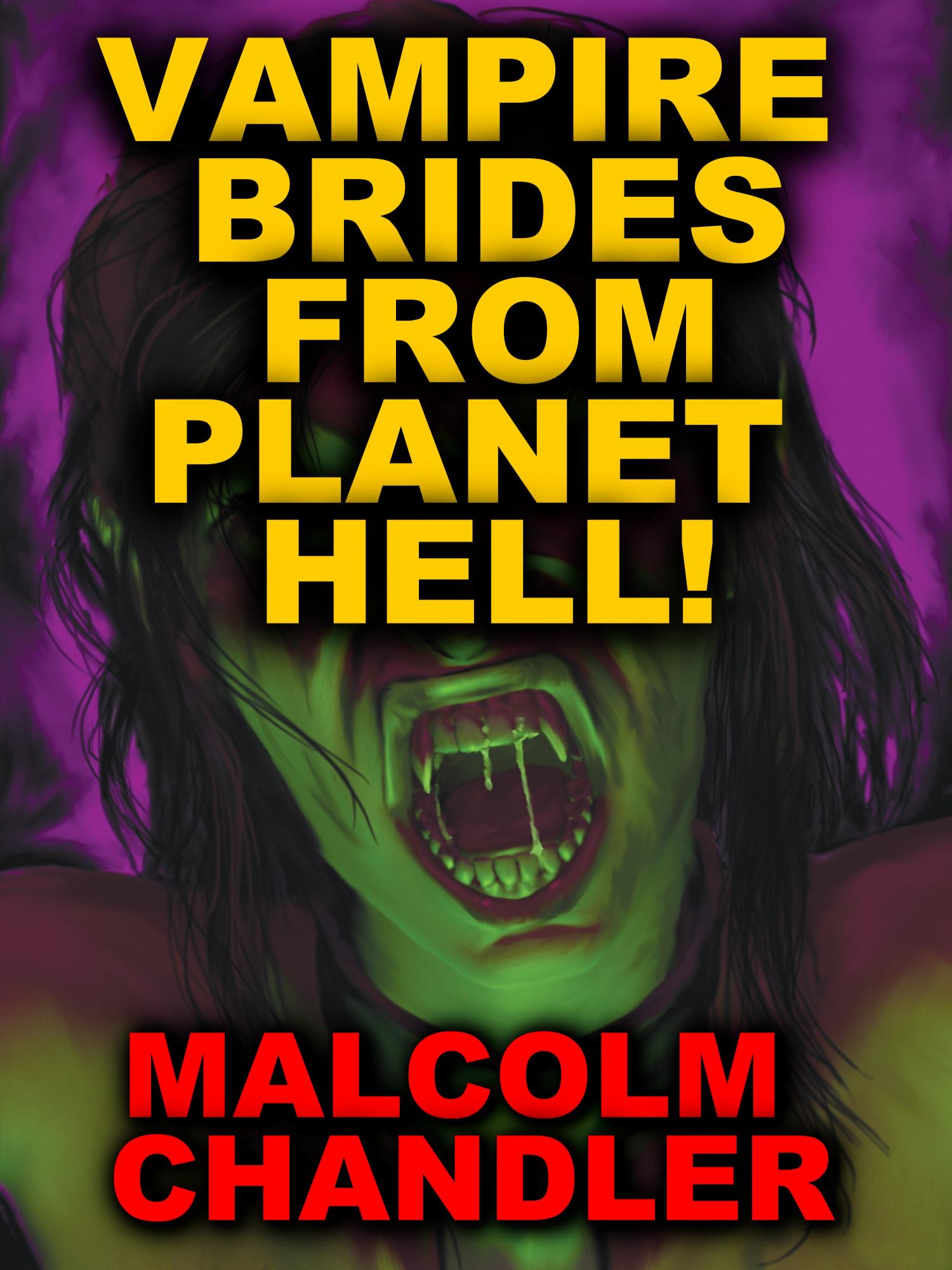 "Chandler continues the rich tradition of pulp. It makes you long for the days when you could buy this and twizzlers as you check out your groceries." - Julian Munds, The Extremis Review "Beheadings, bosoms and blood! [...] Brides is the best kind of pulp, trashy but aware of it and determined to make sure you come away with a smile on your face anyway." - Reece M. Jones, The Cult Den

The Nucleus of the Universe for all Nerd Hacks!

Feeding you thoughts directly from my mind.

"A Word of Substance"

A New Flash of Science Fiction Every Day

You Are Not So Smart
Query Shark